The women’s race was just as exciting with Salomon athlete Anna Frost returning to top form to take out the win in a super fast time of 8:10:41 over second placed Maite Mayura Elizonda in 8:20:29. Anna sure loves this island, the people and this course!

Third place for the second year running was Uxue Fraile who must have had a tough last 21km as she dropped 5 minutes over second place from Roque de Los Muchachos or was because the first two were really flying!

At Roque de Los Muchachos Frost was strong and climbing well doing very little walking. She had 6 minutes on Elizonda who had a 23 minute lead on Fraile. That was to become 10 minutes and 28 minutes respectively.

Unfortunately Emelie Forsberg had to drop very early due to a severe hand injury from a fall at the start in Fuencaliente. I am sure it would have been a great race between the two F’s – Forsberg and Frost – and it would have been very exciting to see them both dice it out. Emelie’s time of 8:13:22 from when she won here last year would not have been fast enough so she would have had to be in really strong form to fight for the win. I am not sure that that would have happened by the look of how strong Frost was today. 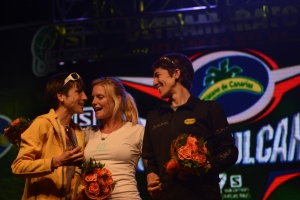 Frost’s course record from 2012 of 8:11:30 was bettered by just under one minute on a course that has had a slight change adding about two minutes so maybe a comparable time of 8:08:41 is reasonable. That just shows that Anna is back on top form and fully recovered from her health issues of 2013 and looking to challenge for top honour’s this year. Can’t wait to see how she performs for the rest of 2014!