We are just days away from the Grand Final of the World Triathlon Series concluder in Edmonton Canada.  Its been an interesting season dominated by Spaniard Javier Gomez leading the men’s series for most of the season with four wins and American Gwen Jorgensen doing much the same after having four successive wins. 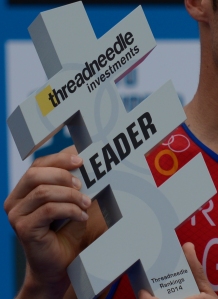 The penultimate round in Stockholm last weekend threw up a couple of surprises.  In the men’s race series leader Javier Gomez pulled out during the 5km run with stomach issues.  Straight out from a choppy 750m swim Jonathan and Alistair Brownlee pulled away from the pack with Richard Varga but, the Brownlees had to much for Varga and early on in the 5 loop 20km bike ride dropped him to make it a Brownlee 1-2 and a great battle to watch. Alistair gave no quarter and it was only in the last 750m when he glanced behind for a moment that brother Jonathan striked and gapped him and then turned up the hill sprinting for home with a final lead of 6 seconds.  With Gomez out this gave Jonathan a well deserved win but also reduced his points deficit to Gomez going into the final round in Edmonton.  There are more points up for grabs so the race is still on to see who will be crowned 2014 ITU World Triathlon champion.  With a difference of 282 points between the two, Brownlee would more or less need to win and Gomez  either drop out or come fifth or lower, not inconceivable, but the way Gomez has performed this season highly unlikely.  We can’t wait to see it all unfold.

In the women’s race with Gwen Jorgensen’s planned out Jodie Stimpson was pre race favourite.  But the Stockholm waters did not favour Stimpson who had a poor swim by her standards and that was ultimately the undoing of her Stockholm race and any chance to reduce the gap to Jorgensen.

Sarah Groff in comparison had an absolutely solid day at the office and claimed a well deserved first ITU WTS win. She took the race by the scruff of the neck straight out onto the run with a no nonsense break from transition that she maintained throughout the 5km run. She was chased , but never under threat, by a group of four that ultimately broke apart on the final sprint up the finishing hill to give a New Zealand second and third to Andrea Hewitt and Nicky Samuels.

But, lets analyse that Groff performance against Jorgensen.  Undoubtedly, they are just about the same on the swim but when it comes to the run Jorgensen is a good 30 seconds ahead.   On the bike in Hamburg there was only 6 seconds in it so again fairly close.

So coming into Edmonton with a rested Jorgensen she has got to be top favourite to come away as the ITU WTS 2014 champion.   But anyone can have an off day, just look at Gomez in Stockholm, but you would never wish that upon anyone.