Twenty-year-old Rémi Bonnet from Switzerland won the 2015 Limone Extreme Skyrace in a time of 2:45:25. Bonnet won the Vertical Kilometer the night before but that didn’t seem to stop his enthusiasm as he led from start to finish in this weather-affected 24.3-kilometer race.
Italian Tadei Pivk finished in a strong second place to seal the Skyrunner World Series Sky division championship in a time of 2:51:08. In third and less than two minutes behind was Manuel Merillas from Spain in 2:52:52.

The weather was horrendous for the past few days with torrential rain blasting down on the area surrounding Lake Garda. Limone is situated on the northwest shores of the lake and by race day the weather gods had decided that we were to have a dry day. Snow was on the high mountaintops and as a result there were some course changes. Most notable was the inclusion of an additional loop adding some 800 meters of vertical gain. The race was now 24.3k long and around 2,800 meters of climb.

As the athletes lined up in Limone’s harbor for a midday start, there was even a glimmer of sunshine. Fortunately, the sun never came out and so made the athlete’s journey just that little bit less arduous.

A fast section out of Limone to limber up the legs led swiftly into a climb of several hundred metres. At the 3k mark, Bonnet had already pushed ahead with a 15-second lead over Spain’s Aritz Egea, who would go on to finish fifth. Pivk was a mere 17 seconds further back and crucially keeping ahead of his Sky series championship rival Merillas who at this stage was lying back in seventh.

Race influencer Marco De Gasperi was in fifth at this early stage but his race was not going to go to plan as he would slip back out of the top 10.

Orgué, looking strong on the climb, was less than three minutes off from Bonnet and already had a good lead with American Megan Kimmel in second. Next was Maiora chasing hard and less than a minute further back was rising star Yngvild Kaspersen of Norway.

With the previous day’s heavy rains, the course was muddy and slippery and as the athletes came in to the finish, their cuts and bruises were many.

First across the line was Bonnet cruising in for a second day’s victory and showing how versatile this young man is in the VK and the Skyrace. 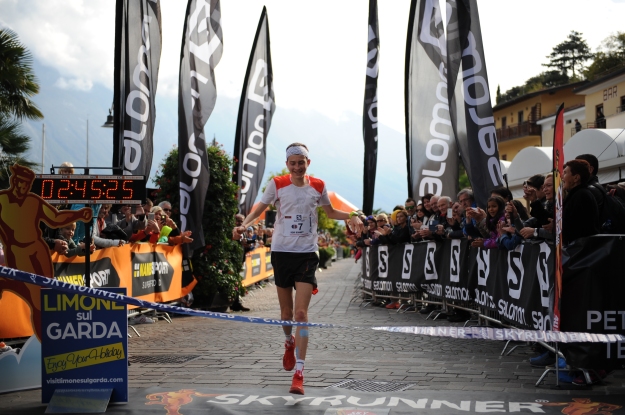 But the loudest cheers from the mainly Italian crowd were perhaps predictably going to be for Italian Pivk, for his second place had also secured him the 2015 Skyrunner World Series Sky division win.

Merillas had run a strategic race closing in on Pivk in the latter stages but just not quite enough to take second.

Orgué was made to work for the win by a charging Maiora. Seventeen seconds was the final gap between them, a little close for comfort. With Kortazar taking third, that made a Spanish triple on the podium. With this win, Orgué has triumphed in the Skyrunner World Series Sky division.

This article was written for www.irunfar.com

All images are copyright – Ian Campbell