Here is my race report and images in full as written for iRunfar.com

The North Face Lavaredo Ultra Trail (119k, 5,850 meters of climb) took place this weekend at Cortina d’Ampezzo in northern Italy.
The Rory Train is rolling and you had better get out of the way! In spectacular scenery and superb running conditions, Rory Bosio won the women’s race in 14:30 and also smashed the women’s course record by one and half hours, holding off a tenacious and hard-fighting Francesca Canepa who finished 15 minutes down in 14:45. Italian Katia Fori completed the podium with another third place in 15:57. 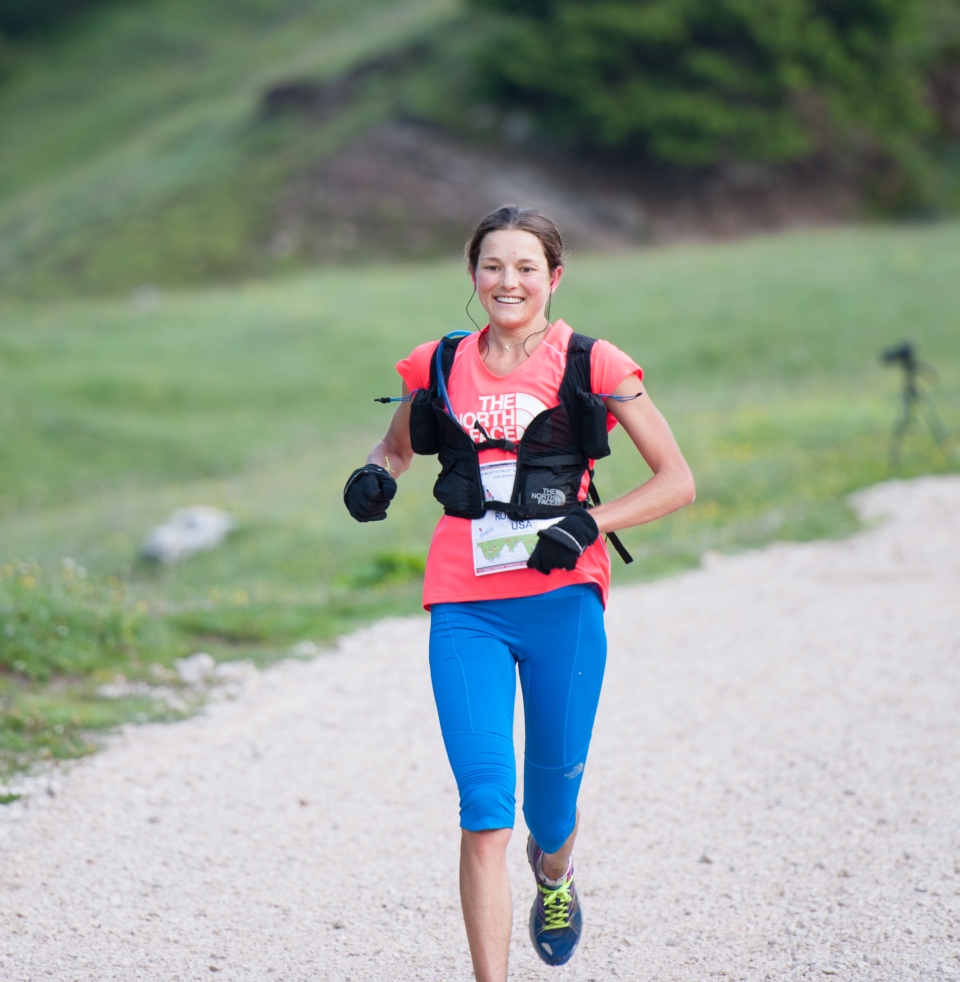 Rory Bosio on her way to the 2014 Lavaredo Ultra Trail win.

In a thrilling men’s race, Anton Krupicka, who was always in the top 10, worked his way up the field finally taking the lead at Rifugio Auronzo (48k) and then never relinquishing it other than an interchange with Italian Fulvio Dapit before he dropped at 75k. Anton came into Cortina amid rapturous applause from a large crowd all along the finishing straight to win in a time of 12:42, just outside the course record held by Iker Karrera at 12:26. Mike Foote finished 15 minutes down in 12:57 after having a hard-fought tussle with Lithuanian Gediminas Grinius who was only four minutes off in 13:01.

Cortina buzzed with excitement as the runners amassed at the start line in the centre of town, ready for the 11 p.m. start in this eighth edition of the Lavaredo Ultra Trail. You had better not be late because in un-typical Italian style, the race horn blew three minutes early.

From the outset, the pace was fast as runners made their way to the first checkpoint at Ospitale 18k away. A block of some 20 runners hit the checkpoint all within three minutes of each other. In this group were all the top contenders led by Frenchman Christophe Le Saux, South African Iain Don-Wauchope, Frenchman Emmanuel Gault,and Gediminas Grinius.

Rory Bosio and Francesca Canepa had set their own pace and hit the checkpoint not much more than 30 seconds apart from each other and only eight minutes off the lead men.

A steep climb of more than 500 meters awaited them, followed by a similar descent through 33k to Federavecchia. The pace was still fast and furious and we had a new leader in Gediminas with Anton close behind. Le Saux and Mike Foote were running within themselves and had now been joined by Cyril Cointre who had made up several places. Now they faced the toughest and longest climb on the course over the next 15k to get to Lavaredo at 2,500 meters. Who would come out on top?

Meanwhile, Rory rocked into the checkpoint, headphones on and saying how much she loved Italy. At 3:19 elapsed, she was only 18 minutes behind the men. Francesca was one minute behind her and ran through the station not wanting to waste any time.

A large group of mainly crew waited for their runners in the warm Refugio Auronzo, drinking espressos to stay awake as it got closer to 4 a.m. At 3:55 a.m., Anton rushed through the Refugio and didn’t even stop to say hello. He was a blur, and closely followed one minute later by Fulvio Dapit. They both had six minutes on the rest of the pack. Mike had had an amazing climb and was now in third place, but Gediminas had slipped to sixth. Was that the slippery slope for this Lithuanian or was he made of tougher stuff?

But what had happened to Rory? Francesca came in first at the Refugio, sat down for some noodles, and looked calm. A whole seven minutes later and Rory turned up. She was going through a bit of a bad patch, complaining about a headache, saying her headlamp was probably on too tight. Dawn was just breaking and she could ditch the headlamp and carry on with the race.

Down in the valley at Cimabanche, at 67k, Fulvio had regained the lead, as we would later find out that Anton had some pre-race meal issues to deal with! Now there was a nine-minute gap to Mike and Gediminas.

A beautiful location awaited the runners for the next checkpoint at Malga Ra Stua, 75k. The lush green pasture was a welcome change from the technical trail as the runners dropped down to this checkpoint. Anton was back in the lead with a three-minute gap to Fulvio and 11 minutes on Mike and Gediminas. Unbeknownst to Anton, Fulvio dropped here (we still don’t know why), and he did not know this until the race finish.

Rory and Francesca were less than two minutes apart at this stage.

Mike Foote on his way to second place.

From Malga Ra Stua there is a two-hour, 20k ascent and descent to Rifugio Col Gallina. Anton cruised into the station looking real comfortable and picked up some water and ran on. But something had changed; Gediminas had gapped Mike by five minutes. Was there something wrong with Mike? His gap to Anton was now 17 minutes with 25k to go. 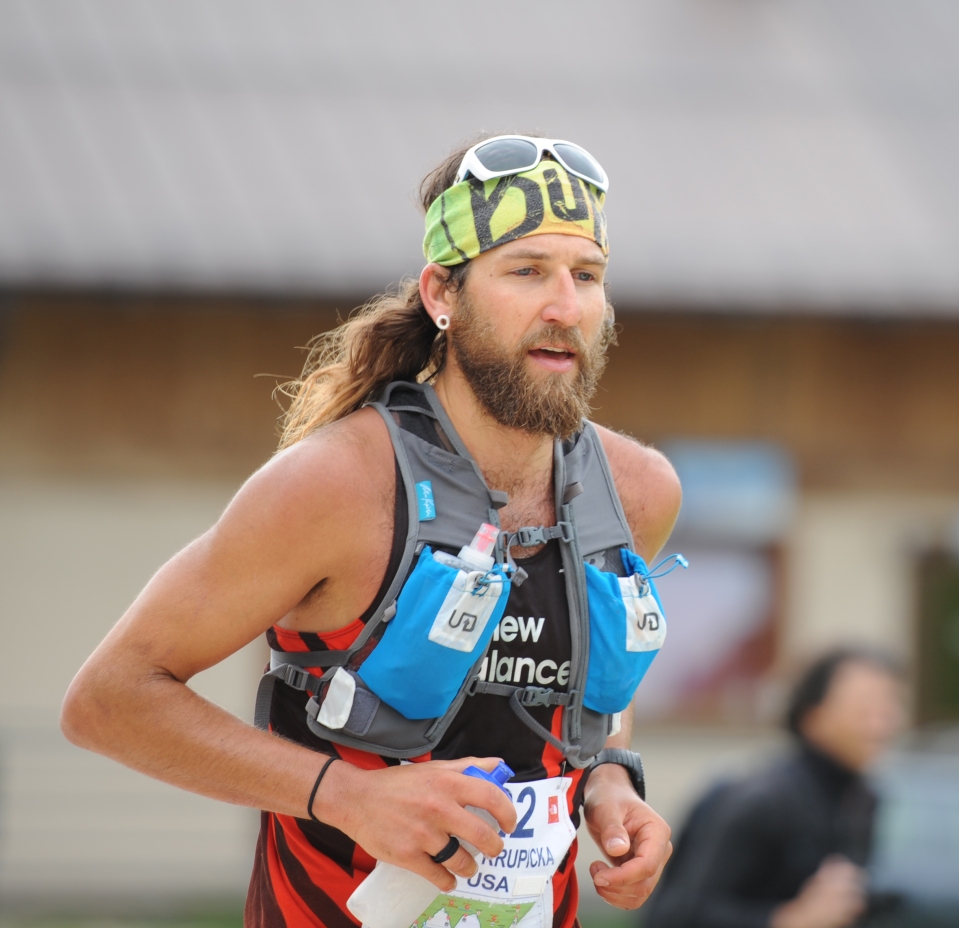 Up to Rifugio Averua and onwards to Passo Giau at 102k and the end is really in sight. Anton was looking comfortable and held a 15-minute lead that he was not to lose. But who was second, Foote had dug deep and had caught Gediminas and they were more or less level, but did he have the upper hand?

At the finish line in Cortina, the crowd eagerly awaited Anton’s arrival. Would he break the course record? Had he taken his vest off? These were the questions the race commentators asked the crowd.

He high five-d the crowd as this journey ended and yet another one begins. It looks like, after such a long journey–not just the 119k that Anton had run but the journey to a win of a major international race–that Anton is back after a long injury. UTMB is in two months and Anton is back on form and will be looking to remedy his DNF from last year there.

Mike ground out a solid second place just 15 minutes behind Anton. He had worked incredibly hard to pass and then hold off a determined Gediminas who came in only four minutes later.

Rory had another outstanding race. When she arrived in Cortina, the crowd roared her name and she thoroughly enjoyed the procession down to the finish line. Not only had she improved on the course record by nearly 90 minutes she also placed 18th overall.

Home favourite Francesca was greeted by the awaiting masses as if she had won. She was only 15 minutes later and had improved on her 15:58 from 2012 by a massive 73 minutes. Katia Fori who had placed third in 2012 in 17:28 came in third again but this time in 15:57, another huge improvement. You have got to say that having really good competition and conditions brought out the best in the women.