Active Patch 4U – is it a worthwhile investment and does it work?   At a time of year when you are considering and entering races to do for the coming season and your probably well into base training whether that be running or a cross training activity, some of us are injured. Now its sort of okay over the Christmas and New Year period as other things tend to take over, but when your itching to get back into training and your injured it plays on your mind, all those lost days and how many weeks it will take to get back to some semblance of fitness. That’s when you start to ramp up your injury physiotherapy, rehabilitation exercises and indeed anything else that will get you back as quick as possible.  Well how about Active Patch 4U?

Active Patch 4U is a French based company created by founders Arnaud Tortel and Jacques Casper from an original idea by Casper and a collaboration between the two in 2009 that leads to 4 years of further research before the patch is put into production and branded Active Patch 4U.

Tortel is a physiotherapist and polar explorer who has knowledge of Chinese acupuncture. Casper who had developed the membrane idea in 2008 fine tunes the membrane size and concentration to achieve optimal results to the eventual patch you see now. 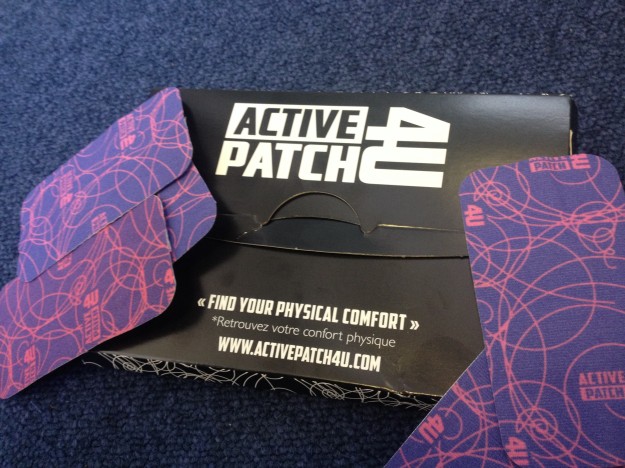 Out of the box – Key Statistics

Depending on quantity ordered the patches are approx Eur 2 each.

Active Patch 4U versus a AA battery

These patches are based on an acupuncture principal and so you usually need between three and four patches for any treatment. The Active Patch 4U website has an excellent self help zone for guidance in how to use and apply the patches. They are primarily for joint and muscle problems.

The Active Patch 4U team have enlisted a series of well known trail and ultra running athletes to lead the way in testing the patches. Kilian Jornet, Emelie Forsberg, Ricky Lightfoot, Tim Olson, Anton Krupicka, Anna Frost, Julien Chorier, Stevie Kremer and Francois d’Haene to name but a few. What would be really interesting is to see if mainstream athletics such as track and field would start to use the patches and endorse them?

Treatments – I have used the patches on several occasions for the following issues.

Application of the patches was followed as per the website diagrams. I am a great believer that health is all in the mind, so a sort of placebo effect is important. If you invested several pounds in the patches you have to believe in their success. I would also advocate that the patches are used as part of a holistic approach to healing. You cannot just rely on sticking a few patches on and think that in a day or two it will go away. Seek and use other healing processes whether that is stretching, physiotherapy or just even rest.

In all my cases, the injury was resolved within a few days. What did I like about these patches? They are easy to carry around with you if you are traveling, they last for at least five days quite well even after being soaked in showers everyday and that does not detract from their stickiness.

There is a whole other facet to these patches in their use as preventive treatment. To date, I have not done this but as I have had recurrent ankle injuries I am going to embark on some preventative measures with the patches and see the outcome. The trouble with this is that there are so many variables that one could not for sure really attribute it to just the patches. But surely that is what it is about? , these patches are part of an armoury you can use to prevent, treat and have a successful running career and isn’t that what everyone is seeking!!

Latest update : December 2014 – With a another, this time left leg, hamstring issue and some physiotherapy and rehabilitation exercises done without total success I am now embarking on some patch treatment. I believe in these little patches so will be aiming to get back to training in very early January 2015.